God has place this wonderful creation in our hands. As U2 sings, "It's a beautiful day, don't let it slip away." We have this one life to live on this beautiful planet so enjoy these reflections on God, faith, life, and music. "After the flood all of the colors came out. It's a beautiful day." 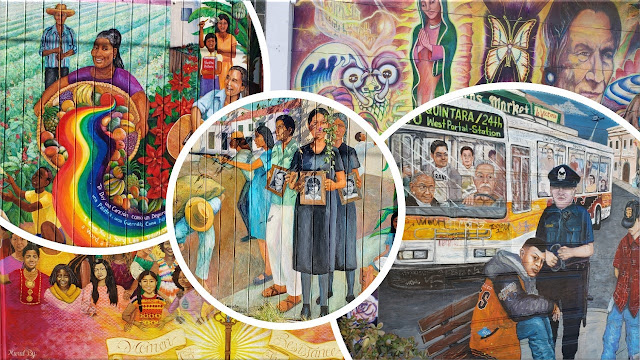 One of the places that Reed wanted to share with me while I was visiting San Francisco was the Mission District. He wanted me to experience the street art. So we wandered around the area. Looking at these amazing works on the sides of the buildings. In the heart of the district is an alley where all of the garage doors and fences are painted with murals. The murals in this alley began in 1972 when Mujeres Muralistas a two woman team laid the foundation by creating murals that reflected Latin American culture and raised political points. In the 80’s, the alley took on its present day form when a troupe of mural activists wanted to praise the Indigenous Central American heritage and protest US intervention in Central America. This alley has 27 murals. The murals on this alley both change and stay the same. Some are repaired from the damages of weather while other are new being painted atop the old. The political themes have expanded to cover the concerns of today while still reflecting on Lantinx culture.
I was transfixed by these images. These images brought up memories, movements in my past that meant something to me. I was reminded of being a teenager and learning about what we as a country were doing in Latin America and the people we were harming. I had met people who sought sanctuary in the US and the churches that provided that sanctuary. I remember my first boycott as a college student when I stopped eating grapes in support of the farm workers. I remember the movements I studied in graduate school – of people seeking to change life under oppressive regimes, especially the mother’s of the disappeared who stood up to the government to find their husbands and sons.
What struck me as I started thinking about this art is how it is enduring and yet temporary. Some of the art is repaired but a lot of the art gives way to a new image, a new politics, a new artist. While the colors and vibrancy is the same, the work is different. The needs in the world have changed and yet remained the same. For we still have people seeking sanctuary, great inequality in wealth, farm worker struggle, women still searching for missing husbands and sons, US involvement that isn’t helpful. As I thought of the art, the culture, and the temporary nature of the art this verse from the bible kept repeating “The grass withers, the flower fades; but the word of our God will stand for ever” (Isaiah 40:8). This passage from Isaiah speaks of the fading of people and the constancy of God, a God who in the midst of trouble is there to comfort the people, strengthen the powerless, and renew the weary.
Posted by Rev. Charlene Hinckley at 11:00 AM No comments: Links to this post

A Eulogy for a Pastor, My Dad


Our Scripture today speaks of seeds being sown. Seeds that grow in places challenging, hostile, and abundant. Seeds that are scattered extravagantly never know how they will grow. Small seed that grow into large trees to shelter others. When we look back at the life of a person we love, I like to look for the seeds. The seeds they have sown that we can continue to sow.

At the end of one’s life one begins to share the stories that tell about your life. Stories that share what you learned that defined your life.

When my dad was little he was run over by a truck/tractor on the farm. He almost died that day, week. When grandma spoke about that time she talked about how they didn’t think he would make it, but she wouldn’t give up. And he survived. Every day he lived after that accident was a gift.

As a child people didn’t consider dad book smart. With the accident, combined with the fact that they didn’t know he needed glasses and had dyslexia made school a challenge. People didn’t expect much from dad in school work. But he had no word for it or how to cope with the dyslexia. It wasn’t diagnosed until he was in seminary. In the midst of learning Hebrew and Greek, reading the Neigburs and Jesus. He learned to be someone that wasn’t expected and those visions people had of him weren’t the end of the story. He learned to be a pastor despite a disability, despite the vision people had of him. When they told him how to preach with a written text he knew that was an option. So he usually had a paper with 3 or 4 words, word to remind him where he was going. He learned to tell stories. He was a captivating preacher. Although sitting at our dinner table after worship you may not have known we all thought he was better than the other people we had heard, because we pushed him and challenged him and debated his points. I learned to preach from him. I found a script limiting and knew if dad could get up and speak from the heart I could too.

Posted by Rev. Charlene Hinckley at 11:55 AM No comments: Links to this post

The week my father died my caterpillar became a butterfly. 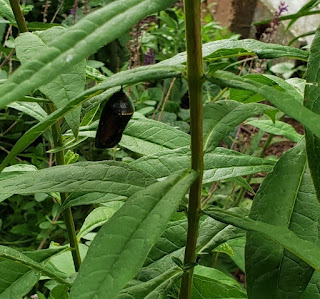 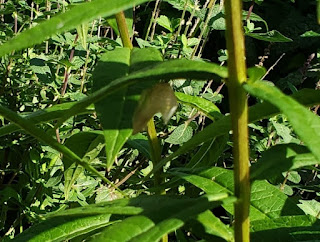 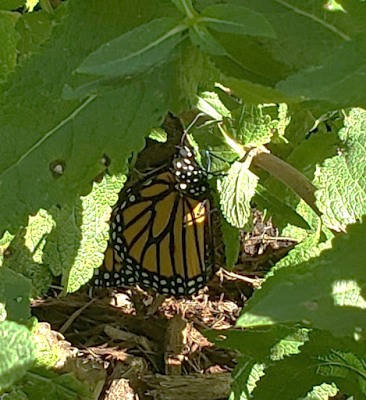 In the book, Gratitude, Diana Butler Bass writes about the time when her grandmother was dying. She had heart problems and had to rely on her daughter to care for her. During this time she started attending a church and learned a song that felt brand new, that she experienced as her story. She believed grace said it all, was the whole story and said it all. Amazing Grace, was brand new both for her and for her granddaughter. Bass after telling this story goes on to speak about the connection between grace and gratitude.
The words “gratitude” and “grace” come from the same root word, gratia in Latin and kharis in Greek, as mentioned earlier. In addition to being the name of a goddess, “grace” is a theological word, one with profound spiritual meaning. Grace means “unmerited favor.” When I think of grace, I particularly like the image of God tossing gifts around—a sort of indiscriminate giver of sustenance, joy, love, and pleasure. Grace—gifts given without being earned and with no expectation of return—is, as the old hymn says, amazing. Because you can neither earn nor pay back the gift, your heart fills with gratitude. And the power of that emotion transforms the way you see the world and experience life. Grace begets gratitude, which, in turn, widens our hearts toward greater goodness and love. Bass, Diana Butler. Grateful (p. 19).
I needed the butterfly this week. I needed to see that chrysalis that I thought would never transform, change. It was weeks. Weeks of that green chrysalis with its golden sewing. I checked it everyday for weeks, waiting for it to become a butterfly. Then I learned that it has to get black and then the butterfly will emerge. So finally my chrysalis turned black as I took a picture and headed off to the hospital to sit with dad. Not knowing what I would get when I was there. The Dad who was mad at us for not taking him home and so didn’t talk to us. The Dad who just slept the whole time I was there. The Dad who would smile and greet you and then fade away, but smile and greet you again when awake. I don't remember which it was that day. What I remember is the Dad I last saw. We had prayed The Lord’s Prayer together and I told him I was off to take care of River. My last sight of my dad was of him seeing me, really seeing me. Seeing me the way he did before the Alzheimer’s took him. He looked at me. I didn’t know at the time that that was goodbye. It was grace and gratitude in one moment I will never forget.

Posted by Rev. Charlene Hinckley at 11:54 AM No comments: Links to this post

Beauty is All Around

The Call to Discipleship in the Gospel of Mark a Prayer Journey, Week 1-3

This is the beginning of your own journey with God through the gospel of Mark. Mark's gospel was written as an invitation to disc... 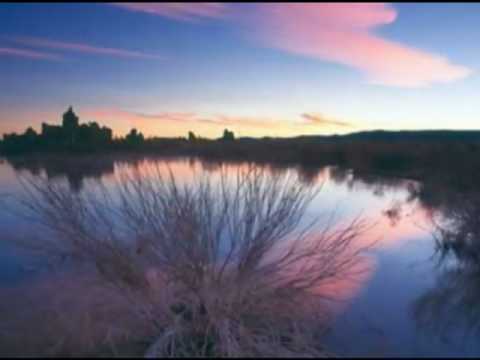